Can you imagine living in a city and not taking any services from the Corporation where you live? Not even Electricity, Water or Gas is required for you to live in that house – looks unimaginable and undoable right? But there is one man in Chennai, who proves you wrong by living in a house that doesn’t need the government to provide him with any amenities.

He generates his own Electricity, Gas and even started generating his own water from thin air. Unbelievable isn’t it? Yes, it takes me great pride to introduce you all to Mr. Suresh (better known as Solar Suresh) from Chennai. He lives in a busy residential area in Chennai.

But he has installed Solar substation on his rooftop, which generates 12-16 units per day, which lights up all his electric appliances including A/C and freezers. He lives in an independent house in Kilpauk area in Chennai. Using the solar energy generated he is able to power up 2 A.C units, one refrigerator, 23 lights, and 15 fans. Can you believe this? 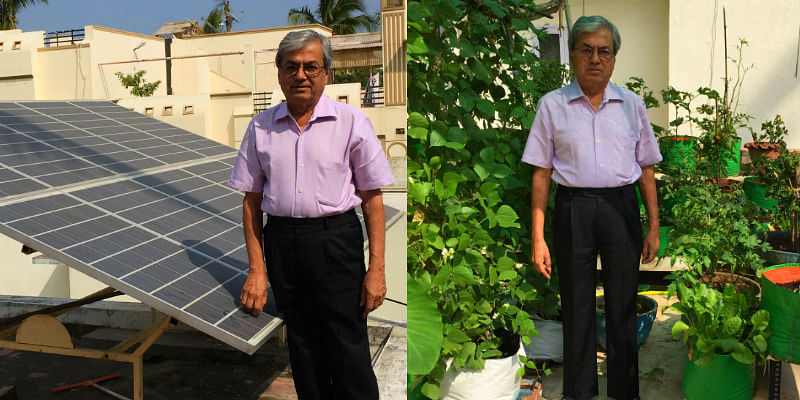 After he has attained the sustainability in the Energy sector by 2015, he started working on the Rain Water Harvesting and he uses all the rainwater that falls within the boundaries of his house.   He doesn’t have a metro water connection nor gets the water tankers from outside. All his water needs are met with this simple installation at home.

Next, he moved on to generating the biogas, based on the kitchen waste available at his home. He not only uses his kitchen waste but uses the waste from the nearby vegetable vendors also and saves them the trouble of disposal of waste. He generates the gas that’s required for his day to day cooking using all these waste materials.  The byproduct from the biogas plant is used as manure for his Organic terrace garden. He grows all the vegetables that are needed for his consumption on his terrace garden.

Now, he started working on the technology that generates water out of the Air. This machine according to him costs him around 40,000 INR for the installation and generates 25 liters of water daily. Don’t you all think that this is the much-needed instrument for a water-starved city like Chennai?

Author’s Note: The salient points of this blog have been obtained from the articles in Hindu and from Wikipedia. A lot of blogs have been published about him to spread more awareness about his Zero dependency lifestyle. So these facts would have been reiterated in other blogs too.

This is part of my Positive Humans series I have been writing on people who are an inspiration, motivation with their attitude of gratitude and ever helping nature.

This post is part of the #WATWB We Are the World Blogfest, a monthly event created by Damyanti Biswas. “We Are the World Blogfest” which seeks to promote positive news. Sharing these stories that show compassion and the resilience of the human spirit increases our awareness of hope in our increasingly dark world.
My cohosts for this month are Shilpa Garg, Dan Antion, Mary Giese, Simon Falk, Damyanti Biswas.